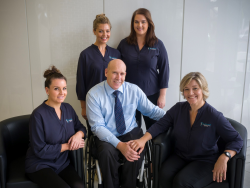 The principle Chiropractor Matthew Hodgson graduated in 1996. He has practiced in the UK as an associate and a locum. He has taught at New South Wales University Department of Medicine as well as Macquarie University having been a clinic supervisor for 5 years.  He has trained in all the techniques you could want to learn and can teach them to you including AK, Activator, NET, torque release, auriculotherapy, NAET and SOT. He has also been coached by a lot of different Chiropractic coaches and has taken the best from them including James Carter of Carter Universal, John Hinwood of Powerful Practices, Mark Postles of Quest transformative Coaching as well as personal coaching through Real Education. We believe in continually investing in ourselves and our team.